In less than a week’s time, three organizations took bold steps intended to slow the spread of AIDS, if not end it entirely.

On September 25, the United Nations General Assembly (UNGA) adopted a sweeping set of 17 Sustainable Development Goals (SDGs), one of which relates to health and aims to end AIDS, tuberculosis, malaria, and neglected tropical diseases by 2030.

These broad and ambitious goals, which also aim to end hunger and poverty and combat climate change, replace the soon-to-expire millennium development goals (MDGs) that were adopted in 2000.

Two days after the SDGs were endorsed by the UNGA, US President Barack Obama urged world leaders to support the SDGs and announced plans to expand the HIV/AIDS treatment and prevention goals for the President’s Emergency Plan for AIDS Relief (PEPFAR). The US government has already invested US$65 billion in PEPFAR, which now supports antiretroviral therapy (ARV) for about 7.7 million HIV-infected individuals in developing countries. By the end of 2017, PEPFAR plans to support ARV therapy for nearly 13 million HIV-infected individuals in its target countries—almost double the current number. PEPFAR also plans to provide 13 million adult male circumcisions to prevent new HIV infections, and to reduce HIV incidence by 40% among adolescent girls and young women in 10 sub-Saharan African countries with the greatest HIV infection rates by reallocating $300 million of current funding. 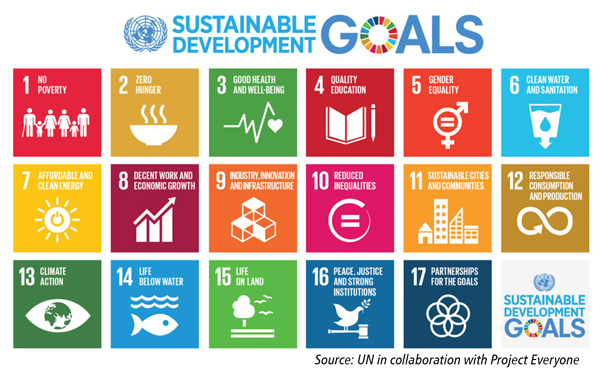 Capping these announcements, the World Health Organization (WHO) issued revised guidelines on September 30 for HIV treatment and prevention. The updated guidelines call for all HIV-infected individuals to start ARV therapy as soon as possible after their infection is discovered. The guidelines also recommend that high-risk, HIV-uninfected individuals be offered ARVs as a means of HIV prevention, a practice known as pre-exposure prophylaxis (PrEP). Previous guidelines were more limited; viral load determined who received ARV therapy, and PrEP was recommended only for men who have sex with men.

Chris Beyrer, a professor at Johns Hopkins Bloomberg School of Public Health and President of the International AIDS Society, considers the SDGs bold and visionary. “My only concern is that on health, they are very broad, and it may prove that they are too broad and general to serve as foci for advocacy, including around HIV/AIDS,” said Beyrer. “The power of the MDGs was at least in part their specificity.  The SDGs may be harder to advocate around.”

And advocacy will likely be key, given the high price tag that accompanies achieving these goals. Governments, foundations, and public-private partnerships are already investing around $19 billion a year in programs that provide ARVs in developing countries, and a recent report released by the Joint United Nations Programme on HIV/AIDS (UNAIDS) and The Lancet Commission estimates it will cost $36 billion annually to end AIDS by 2030.

If anything, the HIV-related MDGs, which called for halting the spread of HIV/AIDS by 2015 and achieving universal access to ARV treatment for all in need by 2010, illustrate how difficult it can be to reach the finish line. Earlier this year, UNAIDS reported that new infections have declined 35% and 15 million people in developing countries are now receiving ARV therapy. Yet ARV coverage still only accounted for about 41% of the 36 million people estimated to be living with HIV/AIDS.

Mitchell Warren, executive director of the global AIDS advocacy organization AVAC, remains optimistic. He recalls the 2000 International AIDS Conference in Durban, South Africa, when doubts remained about whether there was enough money to fund ARV treatment outside the US and Europe. “Look what happened,” he said. “Fifteen years later we have 15 million people on ARVs. The world can change.” —Mary Rushton