A Shot at Fighting Malaria

Malaria, a parasitic illness in humans and animals spread by Anopheles mosquitoes, is a global killer that is particularly devastating to young children. Of the estimated 781,000 deaths from malaria every year, most occur in young children from sub-Saharan Africa, where the disease is endemic and existing tools such as insecticide-treated bed nets or residual spraying are underutilized or not available. The immature immune systems of toddlers and infants are particularly vulnerable to severe malaria, which is characterized by severe anemia, high fever, respiratory problems, renal and nervous system failure, and often death. 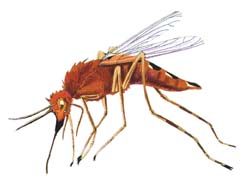 vaccine candidate tested in more than 15,460 African infants and toddlers showed a 56% reduction in clinical episodes of malaria and a 47% reduction in severe malaria primarily among children 5-17 months old up to a year after vaccination. The findings were published Oct. 18 in the New England Journal of Medicine. The trial is still ongoing, with results from a separate arm of the trial involving children 6-12 weeks old not expected until the fourth quarter of 2012.

The vaccine candidate, known as RTS,S, evaluated in this multi-center, double-blind, placebo-controlled trial, targets Plasmodium falciparum, the parasite responsible for most of the complications and death from malaria. It was developed and manufactured by GlaxoSmithKline (GSK) Biologicals and contains a protein on the surface of the P. falciparum sporozoite, the form of the parasite transmitted from mosquitoes to people, combined with a protein on the surface of the hepatitis B virus. The two proteins stimulate an immune response against the malaria parasite when it first enters the human host’s bloodstream, or later when it invades liver cells. To further boost the immune response, RTS,S also contains AS01, an adjuvant manufactured by GSK.

Investigators were clearly excited by this first round of results. “This is an historic moment,” says Mary Hamel, a medical epidemiologist with the US Centers for Disease Control and Prevention and a principal investigator at one of the trial’s clinical research centers in Kisumu, Kenya. “Scientists have been working to develop a vaccine for over 30 years and this is the first time we have seen efficacy in a large Phase III trial. This could be an incredible new tool.” While these results were promising, investigators are particularly curious about the vaccine’s efficacy in the younger age group because a licensed malaria vaccine would likely be administered during early infancy.

Getting to these historic results was not a short path. The RTS,S candidate has been in development for nearly 30 years and would likely not have progressed this far were it not for the Malaria Vaccine Initiative (MVI) at PATH, a Seattle-based non-profit formed 30 years ago to improve global health through science and technology. PATH established MVI in 1999 with an initial US$50 million grant from the William H. Gates Foundation (renamed in 2000 the Bill & Melinda Gates Foundation) to accelerate the development of a vaccine and ensure its availability and accessibility in developing countries. MVI formed a product development partnership with GSK in 2001 to develop RTS,S.

Ashley Birkett, the director of research and development at PATH, says MVI made it possible to push forward a vaccine that otherwise might have languished given the severe economic challenges faced by countries where a malaria vaccine is needed most. “We are dealing with a disease exclusively associated with morbidity and mortality in the developing world and the impetus for any commercial driver is minimal,” says Birkett.

The results from the Phase III trial of the RTS,S vaccine candidate are also considered a major scientific milestone, given the unusual challenges researchers have had to contend with in designing a vaccine against the malaria parasite, which is spread from human to human through the bite of infected Anopheles mosquitoes. The parasites travel through the bloodstream to the liver, where they mature and release another parasitic form, the merozoites, which then enter the bloodstream and infect red blood cells. Because the parasites largely live inside cells, where they mute the body’s immune responses, humans have never been able to develop sterilizing immunity against the pathogen. This means that re-infection by the parasites is an ongoing problem in the developing world. “Children can get many episodes of malaria and still be at risk of death,” says Hamel. “It’s not like polio, where once you get the disease you are immune.”

Because of the parasite’s complicated life cycle, scientists have also had a hard time determining which target on the parasite would induce the strongest immune response and designing a vaccine capable of inducing those immune responses. “We don’t know exactly how this vaccine works, but we know it does work,” says Hamel.


Thus far developers do not view RTS,S as the final malaria vaccine, says Birkett. “But because of the burden of malaria, we do think this vaccine has the potential to save lives,” he says. “And so the Phase III trial was designed with the intention of supporting the release of a product.”

Birkett says final data from the RTS,S trial is expected to be submitted to the World Health Organization (WHO) and the European Medicines Agency in late 2014, at which time the WHO could issue a policy recommendation on whether the vaccine candidate should be used. That still doesn’t guarantee infants will actually receive the vaccine. “It will be up to individual countries to make their own decision whether RTS,S has a place in their immunization campaign,” says Birkett.

But Christopher Whitty, a professor of international health at the London School of Hygiene and Tropical Medicine, says that while the initial results are a scientific achievement, hopes raised by an earlier, smaller trial that it might be even more effective were not confirmed. “Although these are only initial data, the [Phase III] study is large enough and the sites of the trial varied enough to be fairly confident that the 50-60% efficacy in the first year after vaccination will be roughly the final figure,” Whitty wrote in an Oct. 27 editorial in the British Medical Journal.

However, Whitty noted in the editorial that it is unrealistic to assume that first-generation malaria vaccines like RTS,S, as well as those for tuberculosis and AIDS, where complete immunity is difficult to acquire from natural infection, will have similar efficacy as those against rubella or measles, where natural disease induces life-long immunity. “Partially effective vaccines are, where cost effective, a great deal better than no vaccine and should be celebrated as such,” he wrote.