In its 13th annual report, “Piecing Together the HIV Prevention Puzzle,” the AIDS Vaccine Advocacy Coalition (AVAC) says there is an “energized focus on discovery, innovation and basic science” in the field of AIDS vaccines, but noted that successful HIV prevention will likely depend on a combination of approaches and strategies. 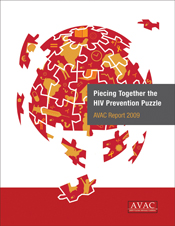 Casting comprehensive HIV prevention as a puzzle still missing vital pieces, AVAC lists eight recommendations in its report. The recommendations include development of better communication tools to explain upcoming vaccine trials to a lay audience, as well as to communicate the result of the soon-to-be-completed Phase III prime-boost trial in Thailand. Another focus of the report is the role of the Global HIV Vaccine Enterprise, an international alliance of researchers, funders, and advocates committed to accelerating the development of an AIDS vaccine. Based on interviews with various stakeholders, AVAC concluded that the “added value” of the Enterprise is “not yet completely convincing.” The AVAC Report recommends that the Enterprise should demonstrate greater leadership, particularly through publication of an updated scientific plan in 2010.

AVAC also highlighted advances in the field—more initiatives aimed at bringing young investigators into HIV prevention research was a notable area of progress. And with the initial results from the now infamous STEP trial nearly two years old, AVAC noted that the failure of Merck’s vaccine candidate has helped propel new and exciting directions in research.

AVAC, which was formed in 1995, uses public education and policy analysis to advocate for the development of an AIDS vaccine. The organization has also taken a central role in advocating for other HIV prevention strategies, primarily pre-exposure prophylaxis (PrEP)—the delivery of antiretrovirals to uninfected individuals to prevent HIV infection. The report, written by AVAC staff, urged the HIV prevention field to prepare for the potential efficacy of prevention strategies such as PrEP, and said governments in the countries hardest hit by HIV needed to “add specificity” around financial, infrastructure, and other implications regarding the possible use of this modality in the future.

AVAC dedicated its report to AIDS activists Martin Delaney, who helped found the San Francisco-based AIDS service organization Project Inform, and Lynde Francis, one of the first HIV-infected individuals to disclose her status in Zimbabwe and the founder of The Centre for AIDS Services in that country. Both died this year.