Antibodies pack a powerful punch. These typically Y-shaped proteins are the reason most, if not all, licensed vaccines provide protection against disease (see VAX July 2014). So it is not surprising that researchers long ago set their sights on inducing them against HIV.

Researchers have been actively pursuing ways to design vaccine candidates that could induce broadly neutralizing antibodies (bNAbs) for decades with little success. Now, thanks to recent developments in stabilizing the virus and in understanding how antibodies develop during the course of natural HIV infection, researchers are inching closer to this goal. A trio of research studies published recently showcase promising first steps in developing vaccine candidates that are capable of effectively stimulating the immune system and launching it in the direction of being able to induce bNAbs against HIV.

There are still many obstacles to developing an effective bNAb-based HIV vaccine, but this latest research is inspiring optimism. John Mascola, director of the Vaccine Research Center (VRC) at the National Institute of Allergy and Infectious Diseases (NIAID), who was not involved directly in the most recent studies, classifies this work as a “major advance.”

Antibodies work in many different ways. One mechanism of action is to bind to and inactivate viruses, such as HIV. Antibodies that can inactivate, or as scientists say neutralize, many different strains of HIV that are in circulation are referred to as broadly neutralizing antibodies, or bNAbs for short. While vaccine candidates developed previously could induce antibodies against HIV, none so far has induced bNAbs. Many researchers think that a vaccine that induces bNAbs against HIV will be the most effective way to protect against infection.

But at the same time, there is also great interest in other antibody activities. This includes efforts to build on the low level of protection induced by non-neutralizing antibodies in the RV144 trial in Thailand, which was the first and so far only vaccine regimen to show any efficacy in humans.

Over the past six years, researchers have made great advances in isolating new bNAbs. New techniques for fishing antibodies out of serum samples collected from HIV-infected individuals as well as improved means of analyzing these antibodies and how they bind to the virus are allowing researchers to characterize bNAbs at what in this field is nearly breakneck speed. After decades of working with just a handful of antibodies, researchers now have scores of more powerful and potent neutralizing antibodies to study. They also are gaining a better understanding of how these bNAbs naturally develop during HIV infection.

Despite the great success in isolating these powerful antibodies, they still are a rare occurrence. Researchers estimate that the immune systems of only 20% of HIV-infected individuals make such antibodies, and they take years to develop. These bNAbs have unique characteristics that allow them to neutralize HIV so well. Many of them have accumulated multiple changes or mutations as a result of continuous exposure to the constantly mutating virus. Following infection, the virus and the immune response against it engage in a bit of a cat and mouse game. By the time antibodies against HIV develop, the virus mutates enough to escape this antibody response. This process of antibody development and virus escape continues for years until the antibodies mutate and mature enough to become broadly neutralizing. By this time, the bNAbs do not help infected individuals control the virus. But administration of these antibodies to mice and monkeys is able to ward off infection with a virus similar to HIV, stoking hopes that if such antibodies could be induced by vaccination they would also protect humans against infection.

There are many reasons that inducing antibodies that could neutralize the vast array of HIV variants in circulation is proving a difficult task. Chief among them is that the target of all antibodies against HIV is the notoriou 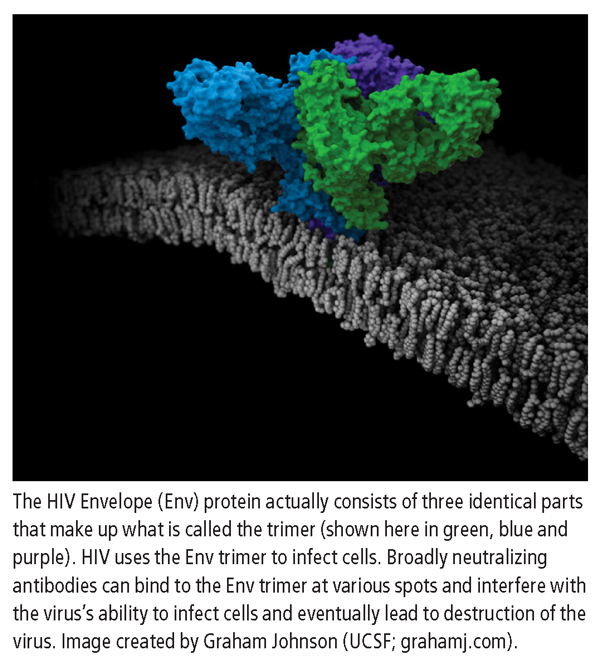 sly unstable Envelope or Env protein that dots the surface of HIV (see image, right). This protein spike, also referred to as the trimer, is so floppy and highly mutable that for years researchers were stymied in their efforts to recapitulate its structure in order to develop a vaccine candidate based on this protein.

This changed in 2013 when after almost two decades of failed attempts, John Moore, professor of microbiology and immunology at Weill Cornell Medical College, and colleagues reported successfully stabilizing an HIV Env protein designated BG505 SOSIP.664. This stabilized HIV Env protein was based on a naturally occurring virus isolated from a six-week-old Kenyan infant who developed bNAbs after approximately two years of infection. Just having in hand a protein that closely mimics the natural structure of HIV Env was a big accomplishment. “This represents more than 10 years of hard work and good virology,” says Mascola.

But the real test was to see if this protein would induce antibodies. Researchers from the University of Amsterdam and Weill Cornell Medical College recently published the results from vaccinating rabbits and monkeys with the BG505 SOSIP.664 protein. They also immunized animals with another stabilized Envelope trimer based on a virus isolated from an infected adult. The data indicate that these proteins induce antibodies, but these antibodies are not able to broadly neutralize a wide variety of viruses that are representative of those currently circulating around the globe. These results are, however, what the study’s authors call an “excellent starting point for iterative vaccine design.”

Researchers are planning several modifications to improve upon these first attempts. One strategy is to immunize with a series of different stabilized HIV Env protein trimers either sequentially or as a cocktail. Another is to remove the portions of the Env proteins that are not the target of bNAbs and may therefore just distract the immune system. “We are going to do all we can to refine their design and learn how to use them better,” says Moore. “Our goals now are to devise ways to broaden the neutralizing antibody response. Only if we can succeed in doing this will we have a chance of coming up with a practical vaccine that might confer a meaningful degree of protection from infection.”

Another approach to inducing bNAbs against HIV that is gaining traction involves reverse engineering vaccine candidates. It works like this: researchers identify bNAbs from HIV-infected individuals and then study precisely where on the virus these antibodies bind. They then use this information to work backwards and design a vaccine candidate based on this spot on the virus. The boon in antibody isolation over the past six years shows that there are multiple sites on HIV Env where bNAbs bind, giving researchers many different targets to work with in designing vaccine candidates.

One class of bNAbs that is widely studied targets the site on HIV that the virus uses to infect cells, known as the CD4 binding site. Researchers at the VRC identified the first antibody from this class, known as VRC01. Since then, VRC01-like bNAbs were identified in at least seven different HIV-infected donors. 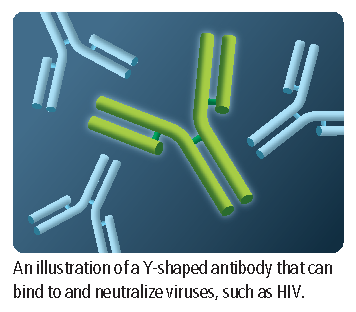 VRC01, like many of the bNAbs recently identified, is no ordinary antibody. It and others in this class of antibodies have accrued many mutations in response to the feverish mutation of HIV. While not all of these mutations are necessary for these antibodies to neutralize the virus, many of them are. To encourage the immune system to generate such highly mutated and evolved antibodies, researchers are trying to use a step-wise approach to guide the development of VRC01-like antibodies.

They start by determining what the original version of the VRC01-like antibody most likely looked like and then design a vaccine immunogen (the component of a vaccine candidate that triggers an immune response) that will hopefully induce this antibody. Then using a series of different immunogens administered sequentially, researchers attempt to guide the immune system to develop more and more mutated, and therefore more broadly neutralizing antibodies.

In a recently published paper, researchers from The Scripps Research Institute (TSRI) in La Jolla, IAVI’s Neutralizing Antibody Center, and the Ragon Institute showed they could successfully initiate the first step of this process in mice.

Joseph Jardine, a postdoctoral research fellow in Bill Schief’s laboratory at TSRI, and colleagues engineered an immunogen designed to induce antibodies that are similar to the earliest, less mutated version of the VRC01 antibody. Mice immunized with a single injection of this immunogen developed antibodies with characteristics similar to that of the VRC01 class of antibodies, whereas the BG505 SOSIP.D664 protein did not. By 42 days after immunization, many of the antibodies in the vaccinated mice had accrued mutations that resulted in more than a 1,000-times increase in their binding activity to HIV, a welcome result.

“We’ve initiated this process and we think that’s a big step forward,” says Jardine. “You knew it was a long shot when you started out. There were so many reasons it could fail. It’s so cool that it worked out.”

In a related study, researchers at The Rockefeller University collaborated with the TSRI researchers to test the same immunogen in a different mouse model. This study produced similar results.

Now researchers are plotting studies to test the second step in the sequential immunization strategy. They speculate that a series of at least four immunizations with different immunogens will be required to induce the type of broad neutralizing activity conferred by VRC01-like antibodies.

“These are important first steps toward cultivating broadly neutralizing antibodies against HIV in animal models of the disease and they suggest that clinical trials may soon be underway,” says Mascola. “It’s an exciting time in the field.”