With a full wallet, Gavi is set to expand influence and reach in immunizing the world’s poorest children.

From its launch 15 years ago the global private-public vaccine alliance Gavi, as an essential part of its goal to get life-saving vaccines to millions of children in the poorest countries of the world, strived to become a real influence in the global pharmaceutical market. It may now be.

On January 27 in Berlin at the alliance’s donor conference, Gavi banked US$7.5 billion, completing its second big round of funding, this one to support its vaccine programs in developing countries through 2020. In the 73 countries home to the world’s poorest populations, Gavi is the conduit to life-saving vaccines preventing the kind of common killers like measles and whooping cough, as well as to more recently introduced vaccines, such as those against pneumonia, cervical cancer, and diarrhea. It does so by effectively underwriting and negotiating lower prices for vaccines, aided in great part by flexing its muscle as a single bulk buyer with a fat wallet. Gavi brings its member nations into co-financing agreements for vaccines, sometimes at nominal costs, at the discounted prices it negotiates and finances. The alliance can then quantify demand to the vaccine producers, guaranteeing these large pharmaceutical companies a steady and large sales volume. This lends Gavi leverage to negotiate price. The countries themselves administer their own immunization campaigns, with Gavi, the World Health Organization (WHO), and the United Nations Children’s Fund (UNICEF) lending technical assistance and support in actually getting shots in arms.

A case study from Great Britain’s Department for International Development declares Gavi an “innovative business model that not only finances the introduction of new vaccines in developing countries, but also reshapes the vaccine market, spurring the development of vaccines and expanding production.” The UK is Gavi’s biggest single donor. Wiley’s Handbook of Global Health Policy says Gavi is “increasingly looking at its potential influence or role in upstream research and development,” with the added advantage that “they use a model that industry understands and responds to.” Gavi is now, by volume if not margin, pharma giant GlaxoSmithKline’s largest single customer.

Over the last five years Gavi efforts have led to the immunization of 245 million children; its goal for the next five is to administer another 300 million shots, saving possibly five to six million lives otherwise lost through preventable causes. “Looking at these challenges, Germany is taking the decision to increase our pledging,” Chancellor Angela Merkel said in announcing a $720 million pledge at the Berlin meeting. Under the stylish dome of a ’60s-era congress hall and showpiece of the former East Berlin, Britain pledged $1.57 billion. Rajiv Shah, Administrator of the US Agency for International Development, pledged $800 million.

The vaccine alliance’s chief executive, Seth Berkley, who founded the International AIDS Vaccine Initiative and helmed it until 2011, says Gavi created a market that didn’t exist before. “Many of those [developing country] marketplaces just didn’t have reliability of currency, or couldn’t give appropriate demand forecasts, and that meant that companies couldn’t scale up adequately to serve them. We’ve created a marketplace now that is stable, that’s predictable.” 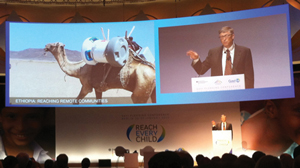 Bill Gates, Microsoft founder and co-chair with his wife Melinda of the Bill & Melinda Gates Foundation, took the stage with glee at the Gavi donor conference in Berlin where he described a newly developed superthermos for vaccines. “For 90 days it can keep vaccine cold without any need for energy at all,” he says, which buys time and flexibility. Gates also shared one way to transport the superthermos: the ship of the desert, the camel. Photo by Michael Dumiak.

What’s happening in the search for a vaccine against the Ebola virus is another example of Gavi’s strength and (perhaps) its limits. Through more than 30 outbreaks in three decades, even though Ebola gained the world’s attention with its startling lethality and fearsome symptoms in books like Richard Preston’s The Hot Zone, it just didn’t affect enough people to attract the kind of resources it takes to develop a vaccine. That is, until last March. By last fall 22,000 were infected with Ebola in three west African nations. The WHO and other public health institutions like the US Centers for Disease Control and Prevention faced the prospect of the virus globe-hopping into African mega-cities like Lagos and on into western Europe and the US. The hunt for a vaccine suddenly intensified.

This would have happened without Gavi. What Gavi did do in December is guarantee to purchase, at scale, a future WHO-approved Ebola vaccine. The board signed off on plans to spend up to $300 million for up to 12 million courses (which, by napkin math, sets a price of $25 a course). First of all, there’s little chance even Nigeria’s health system, well off by regional standards, would be prepared to pay that kind of price. Gavi is creating stability for a product that doesn’t even exist yet: it is absorbing the risk of pricing and defining the market, which might otherwise cause friction among pharma manufacturers and governments, delaying development and action. When the vaccine comes, it will already have a buyer lined up and the promise of a consistent distributor.

But even while the alliance is poised to vaccinate millions more children, there is still need to shore up poorly managed health systems in poor countries. This may be beyond the scope of Gavi. Expert speakers and dignitaries gathered in Berlin repeatedly mentioned the need to bolster entire systems girding the creaky and failing public health infrastructure in much of the world. Panelists called for improved testing for faster diagnoses and analysis in order to aid more effective vaccine distribution. For example one factor in slowing response to Ebola last year is that it can be mistaken for other diseases such as malaria or cholera. A meningitis outbreak can also look like malaria. With blanket coverage from vaccines, diagnosis wouldn’t matter. But since reaching everyone with every vaccine is an unlikely prospect, more accurate testing is required to pinpoint outbreaks and speed the response. “Systems are critically important,” Richard Sezibera, Secretary General of the East Africa Community, said during a panel in Berlin. Shoring up those systems is a global task. While Gavi seems like an institution that can contribute to these efforts, bringing a holistic fix to public health infrastructure might be a lot for it to handle.

Gavi seems more likely to make its mark in creating demand for vaccines where none exists (in market terms, if not human) and by pressing down on prices. But just what constitutes a fair price for vaccines in the poorest nations isn’t at all clear. Drug makers justify high prices in certain cases as necessary to recoup the costs of development. Duncan Moore, a former pharma analyst and now a biotech investor, says big pharma still measures and sets its earnings expectations using numbers inflated by the blockbuster drug era of the ’80s and ’90s. By this logic Gavi may be lowering prices that are set too high in the first place.

Some analysts and experts suggest Gavi could be driving a harder bargain with pharma. Max Lawson, Oxfam’s head of global policy and campaigns, said during Gavi’s last donor conference that the reason it was running low on funds is because it was paying too much for vaccines. Kate Elder, vaccines policy advisor at Médecins Sans Frontières (MSF), argues that profit expectations for pharma companies and their pricing calculations are unclear, making it hard to know if a discount is really a discount. “In order to have an educated discussion you really need more information from the companies on what their bottom line is,” she says.

Yet Oxfam and MSF both say they support Gavi. “Gavi’s set the lowest global price for the vaccines that they are buying. They’ve done a good job—and they can push further,” Elder says.

There are also many countries now poised to leave the Gavi umbrella of nations, having raised their economies above levels where they qualify for Gavi support, but for which western pharma prices are still out of reach. One of Berkley’s pitching points during this funding campaign is that the next five years should be the ‘peak’ of Gavi’s funding. After that 22 countries will graduate out of Gavi assistance. A key promise in the Gavi model is that these countries will take on increasing responsibilities. But as Elder points out, this also creates a dilemma: what happens if graduating countries still can’t afford market rates?

Prices for new vaccines may be high. For old ones they may be low. But for those who can’t pay either it doesn’t make a difference.