Scoping out the Gut

among children from developing countries, though the response rates to vaccines that are administered systemically by injection—such as the measles vaccine—are much less impaired.

Exactly why children in poor countries seem to have weaker response rates to oral vaccines is not clear, noted researchers attending the Keystone Symposium on Malnutrition, Gut-Microbial Interactions and Mucosal Immunity to Vaccines, held Nov. 7-11 in New Delhi, India, a country where 42% of children under age five suffer from malnutrition, according to a 2012 report from the Naandi Foundation, an independent charitable group. In addition to poor nutrition, many children in developing countries have an unhealthy gut environment, which also contributes to their poor response to oral vaccines. According to Gagandeep Kang, professor and head of the Wellcome Trust Research Laboratory at the Christian Medical College in Vellore, India, and one of the organizers of the conference, malnutrition and immune system dysfunction also likely exacerbate each other, with unfortunate results. Malnutrition seems to cause the gut to fail to serve as a barrier to pathogens, and infection with these pathogens further damages the gut and affects the absorption of nutrients, which in turn makes the malnutrition worse, she said.

However, understanding precisely why vaccines don’t work in this environment isn’t easy, according to Chris Wilson, director of discovery at the Bill & Melinda Gates Foundation, one of the sponsors of the symposium. The Keystone symposium focused on the role nutrition plays in gut immunity because a better understanding of this role might lead to the development of vaccines that work better in children in developing countries.

Unfortunately, combing the gut for clues is difficult because this process typically requires taking tissue biopsies, an invasive procedure that for obvious reasons is not advisable or done in children. Instead, Kang said researchers have had to resort to indirect methods such as measuring serum or fecal levels of the antibody immunoglobulin (Ig) A, which is produced at mucosal surfaces, such as those lining the gut, 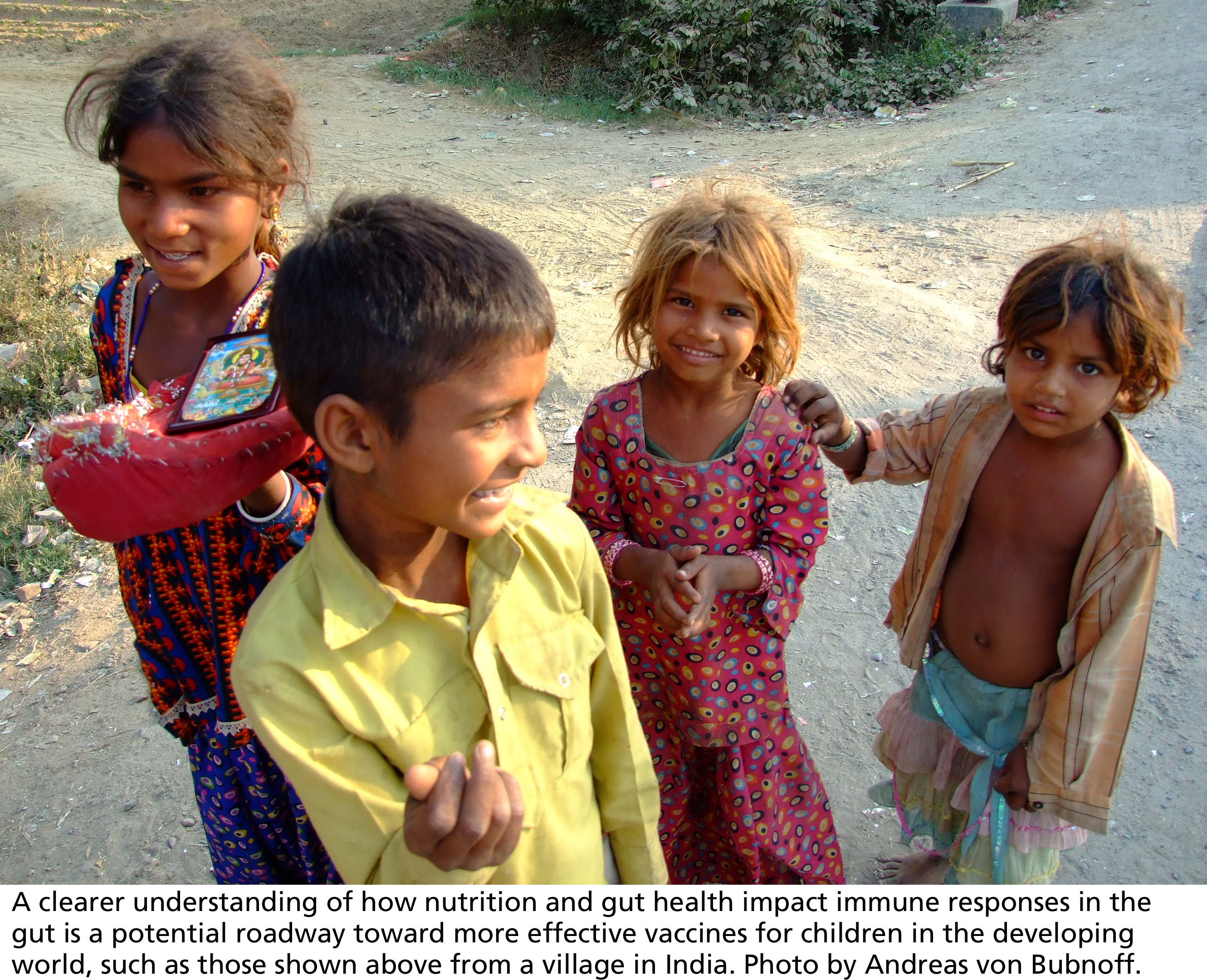 among other places. But just using markers like this antibody isn’t ideal, leading the Gates Foundation to announce US$9 million in grants at the meeting to support research to find better non-invasive markers for assessing gut function and health.

Despite the challenges in determining gut health, researchers are beginning to connect the dots about why malnourished children have a poorer response to vaccination. William Petri, a professor of medicine at the University of Virginia, and colleagues looked at a group of three-year-old children from Dhaka, Bangladesh, and found that the children with more stunted growth were less likely to respond to the oral polio vaccine (OPV), suggesting a possible role of malnutrition.

Evan Newell, a research associate in Mark Davis’s lab at Stanford University, and colleagues also found evidence of chronic inflammation in a subgroup of children in Petri’s study who failed to respond to OPV. Chronic inflammation could dampen the response to vaccination because it can ultimately push the immune system to get so burned out that it becomes desensitized to the vaccine. Newell and colleagues actually found evidence that the immune systems of these children are becoming desensitized to the vaccine.

Given that the gut environment plays an important role in the response to vaccination, researchers are trying to understand how to improve the gut environments in these children. One way to do this is to add probiotic or “good” bacteria, such as the kinds found in yogurt, which are believed to improve gut health. Until recently there wasn’t much solid evidence that probiotic bacteria improve gut health, but that is changing, said Kim Barrett, a professor of medicine at the University of California in San Diego. “Historically there has been a lot of belief and not so much scientific evidence,” Barrett said. “There is plenty of data out there now looking at beneficial effects of these probiotic strains on the gut.”

Shinji Fukuda, a research fellow at the RIKEN Institute in Yokohama, Japan, reported at the conference that a certain type of probiotic bacterium called Bifidobacterium that is found in yogurt could protect mice from dying from infection with a certain serotype of the bacterium E. coli. Fukuda and colleagues found that the probiotic bacteria had a gene that enabled them to import a certain type of sugar. This eventually results in activation of an anti-inflammatory response in colon cells.

In another study, Barrett fed mice that had inflamed colons and diarrhea two other probiotic bacteria strains (Lactobacillus acidophilus and Streptococcus thermophilus) daily for two weeks. They found these probiotic bacteria strains found in yogurt could ameliorate diarrhea and weight loss in the mice. Next, Barrett wants to better understand if these probiotics can also improve the symptoms of mice infected with the food-borne bacterium Salmonella. If they can, then probiotics might be a possible treatment for diarrhea caused by Salmonella infection in humans.

Directing immune responses to the gut

In addition to finding ways to improve the gut environment, researchers are also searching for different ways to deliver orally administered vaccines designed to combat intestinal diseases like rotavirus. Conventional intramuscular or subcutaneous immunizations often only induce weak immune responses in the gut, and therefore protect only weakly against infections that occur there. However, researchers are starting to modify injected vaccines so that they can induce immune responses in the gut. Some approaches involve using vitamin A or its derivative retinoic acid to direct immune responses to the guts of mice.

This Spotlight was adapted by Regina McEnery from an article by senior science writer Andreas von Bubnoff that appeared in the November/December issue of IAVI Report.