Work by the Collaboration for AIDS Vaccine Discovery (CAVD), an international research network created in 2006 by the Bill & Melinda Gates Foundation to accelerate development of an AIDS vaccine, has been highlighted in a first-ever cumulative review. The report, available at www.cavd.org, provides an overview of the scientific and operational (legal and business) progress made by the CAVD network, which now comprises 400 investigators in 21 countries, over the past two and a half years. Total funding for the CAVD now exceeds US$327 million, representing the majority of the Foundation’s support for AIDS vaccine research and development.

The CAVD supports the goals of the Global HIV Vaccine Enterprise, as described in its Scientific Strategic Plan, which was first proposed in 2003 by a number of HIV researchers and policymakers as a way to promote multidisciplinary and collaborative approaches to generating and testing vaccine candidates. When it was created, the CAVD model included 16 funded institutions but it has since grown to include 19 primary grantees that all work with a number of other collaborating institutions around the world. Additionally, two grantees funded through the Gates Foundation’s Grand Challenges in Global Health program are also collaborating with the CAVD. —Regina McEnery

Using high-speed three-dimensional imaging equipment and a version of HIV embedded with a green fluorescent protein, a team of virologists and physicists were recently able to track and film in real-time the process by which an HIV-infected cell passes the virus to other cells. The movie tracked one of HIV’s proteins, known as Gag, as HIV was transmitted from an already infected CD4+ T cell to another CD4+ T cell that it was targeting (http://www.youtube.com/GreenVSLab).

In Day-Glo colors, these movies illustrate what happens when HIV-infected cells collide with uninfected cells and convey how rapidly the Gag proteins—with the help of adhesive contacts called virological synapses that are formed at the juncture of CD4+ T cells—pass from infected cell to uninfected cell.

Together, virologists at Mount Sinai School of Medicine in New York City, who created the fluorescent version of HIV, and physicists at the University of California-Davis, who supplied the expertise in high-speed imaging, produced 12 movies detailing this process. Some depict just a few seconds in the life cycle of the virus, while others—with the help of time-lapsed photography—span several days. Although these short films may not compete with Hollywood blockbusters, after a week on YouTube, one of the short films had more than 150,000 hits.

Benjamin Chen, the Mount Sinai virologist who created the glowing HIV, says a fast video microscope capable of taking three-dimensional images of infected cells every second or so, showed that HIV Gag quickly congregates at the virological synapse, forming a button shape. The footage then shows the viral proteins being ushered into a target cell’s endosome, a membrane-bound compartment that many other viruses use to gain entry into cells but which HIV was not thought to favor much. 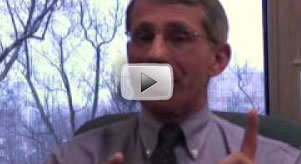 Anthony Fauci has been at the forefront of AIDS vaccine research for decades. When AIDS surfaced in 1981, he, like many other scientists and physicians, was drawn to the mysterious illness, which has now claimed more than 25 million lives—more than the populations of Ghana or Taiwan. Since 1984, he has served as director of the National Institute of Allergy and Infectious Diseases (NIAID) at the US National Institutes of Health (NIH). He has been a key advisor to US presidents on global AIDS issues and was a leading architect of the US President’s Emergency Plan for AIDS Relief (PEPFAR). Born on Christmas Eve, 1940, and raised above a pharmacy in Brooklyn, New York, he earned a medical degree from Cornell Medical College. Fauci, a marathoner, avid fisherman, and father of three, has invited AIDS activists into his home. Last year, he presided over a US$4.4 billion budget—roughly a third of it dedicated to HIV/AIDS research.

He ranks among the top 10 most cited HIV/AIDS researchers in the world and has received numerous awards, including the Presidential Medal of Honor for leading the fight against HIV/AIDS and the Lasker Award for Public Service. "I don’t see myself as a politician, I see myself as an honest broker of science. That’s the reason I think I’ve been able to be effective," Fauci said during a January 2009 interview with IAVI Report Managing Editor Kristen Jill Kresge and Science Writer Regina McEnery, which served as the basis for this first installment in the Living History series and features Fauci in his own words.

Additional chapters, each featuring a recounting of historic milestones in the search for a vaccine by some of the most prominent players in the field, will appear in upcoming issues.

What are researchers learning about the enemy that a preventive AIDS vaccine would need to block—the virus that is transmitted and establishes infection?
While many factors have hindered the development of an AIDS vaccine, HIV’s astonishing degree of diversity remains one of the biggest obstacles. To put HIV’s diversity in perspective, consider this: The global diversity of influenza A, the virus that causes the flu, each year is roughly equivalent to the diversity of HIV in a single individual after six years of being infected. With 33 million people around the world currently infected with HIV, it makes for a mind-boggling degree of diversity.

Designing and developing an AIDS vaccine to tackle that degree of viral diversity can seem an overwhelming prospect, so researchers have turned their attention to studying the enemy that a preventive AIDS vaccine would need to block—the virus that is transmitted and establishes infection.

But nailing down the earliest events of HIV infection is a tricky proposition. For one, HIV is most often a sexually transmitted infection, making it impossible for scientists to study the actual infectious event. Also, since most individuals do not recognize or learn of their HIV infection immediately, it is difficult for researchers to obtain samples from individuals very soon after they become infected.

To overcome this hurdle, scientists have been collecting samples with greater frequency from cohorts of uninfected individuals who are at risk of acquiring HIV. Discordant couples, in which one partner is HIV infected and the other is not, are one group that is particularly useful to study. Discordant couples are uniquely valuable because they allow scientists to study both the virus that establishes infection in the newly infected partner, as well as the virus population that is circulating in the transmitting partner.

Large cohorts of discordant couples have been established in Rwanda and Zambia and frequent sampling—every month instead of every three months—of uninfected partners in these cohorts has helped researchers identify new HIV infections much closer to the point of transmission. The more frequent testing and sampling also helps reinforce risk-reduction counseling messages and promotes condom use among couples.

Technical insights are also helping researchers collect information about HIV transmission. Researchers are now able to analyze historical blood samples that were collected from a single individual and work back in time, using models that predict virus evolution, to determine with a high degree of certainty the genetic characteristics of the virus that initially established infection.

When researchers analyzed samples from just under 200 individuals who were newly infected with HIV, they found that in the majority (81%) of these individuals, a single virus led to infection. This observation was later confirmed in a group of discordant couples—in 20 discordant couples studied, 90% of infections were initiated by a single virus, despite the fact that the transmitting partner had multiple HIV variants circulating in their bodies.

These observations may have important implications for AIDS vaccine design since it could indicate that a preventive vaccine would only have to contend with a very small number of viral variants to block an infection from ever occurring. However, since the virus that establishes an infection quickly mutates and varies, there is still a very short period of time in which a preventive vaccine would have to act before diversity of the virus becomes a problem.

Despite the bottleneck that appears to ensue during sexual transmission, researchers believe that a quarter of the time, two or more viruses succeed in establishing infection in a newly infected individual. In studying these cases, researchers have found an association between the presence of genital infections and the number of transmitted viruses that establish infection in a single individual, suggesting that other sexually transmitted infections may alter the transmission bottleneck.

New data also suggest that the number of viral variants that are transmitted and establish infection may vary greatly depending on the mode of transmission. For example, in cohorts of injection-drug users or men who have sex with men, researchers have observed that on average, a much higher number of viral variants are responsible for establishing infection than are seen in heterosexual transmission.

Researchers are now genetically analyzing the properties of the virus that gets transmitted and establishes infection to look for additional clues that may inform vaccine design.