Q & A with Peter Staley

Longtime AIDS activist Peter Staley spoke with VAX about the early days of AIDS Coalition to Unleash Power (ACT UP), which was chronicled in the Oscar-nominated film, “How To Survive A Plague.”

It was 26 years ago next month that gay activists, terrified by the specter of AIDS, united to form the AIDS Coalition to Unleash Power (ACT UP). Three weeks later they held their first demonstration on Wall Street to protest the drug pricing practices of pharmaceutical companies, but the group soon turned its attention to Washington. Chapters blossomed in cities across the US, and ACT UP is now seen as a model for grass roots activism. The explosive years of ACT UP’s New York chapter were captured last year in the documentary “How to Survive a Plague,” which is nominated for an Oscar on Feb. 24. Produced by journalist and first-time director David France, the film examines how ACT UP—and the Treatment Action Group (TAG), an offshoot of ACT UP—drew attention to the HIV epidemic, using a range of aggressive tactics that included not only protests at Capitol Hill but such antics as infiltrating the set of a nightly news broadcast and marching outside the home of Anthony Fauci, the director of the US Institute for Allergy and Infectious Diseases, which was funding many of the AIDS drug trials. “How to Survive a Plague” is by no means the only documentary of late about ACT UP. Others include “United In Anger: A History of ACT UP,” and “We Were Here,” which focuses exclusively on the San Francisco activist scene. Peter Staley, a long-time member of ACT UP and founding member of TAG who is attending the Oscars on Sunday, spoke with VAX science writer Regina McEnery on Feb. 18 about the movie and AIDS activism. Staley founded AIDSmeds about 13 years ago.

There’s been quite a few documentaries released in the last year or two about AIDS activism in America. What did you like about these films and what do you think they missed?

I’m a fan of all the recent documentaries, like “We Were Here,” “United in Anger,” and “How to Survive a Plague.” They touched me in very different ways and they are each a sliver of a larger story of those years. “How to Survive a Plague” looked at this very narrow [story] about treatment activism and ACT UP in New York, and the split that occurred [within the group] after that. The first time I saw it, I thought, where was Martin Delaney [a treatment activist who founded the San Francisco-based Project Inform], who was in and of himself a gigantic force at that time. I understand the limitations of the format, the time limitations, and the limitations in terms of how much narrative you can give an audience so they stay with you and with the film emotionally. I think audiences are smart enough to know they are looking at selected stories, selected pictures of a larger narrative, so I kind of gave [the film] a pass on that. “We Were Here” is very San Francisco-centric, and I have to say I have never been so emotionally moved. I had heard about what occurred there, but I wasn’t there. So I greatly appreciated [the film].

Why are we seeing such a burst of films about AIDS activism in America right now?

David France suggests a theory that there is this kind of 15-year mark after significant historical moments where the archivists start collectively looking back. We saw it, I think, with the Holocaust and more recently the Vietnam War. You need enough emotional distance to reflect on events. Certainly, with HIV/AIDS, it was so painful to the community that even now it’s difficult to reflect on that time. I know quite a few ACT UPers who have not seen these films. These are active members who just say they aren’t ready yet. For me, I kept many of those events on an emotional shelf. David Barr [a founder of TAG and ACT UP’s Treatment and Data Group] commented to me about this. When we saw “How To Survive A Plague” for the first time we were kind of shocked at how we had not allowed ourselves to remember. It kind of shook us by the shoulders and said it’s time to remember.

There is a photograph of you getting arrested that 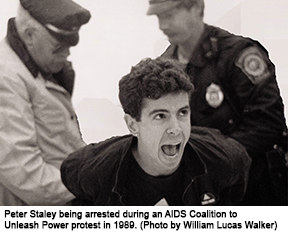 has been used front and center to showcase “How To Survive A Plague.”  When and where was the picture taken?

It was taken in 1989 and it was actually my fifth arrest. It was taken by William Lucas Walker.  It was one of these—we did a series of demonstrations against Astra Pharmaceuticals [now AstraZeneca] up in Westborough, Massachusetts. They had an [experimental antiviral] drug called foscarnet which we had various issues with. I joined an ACT UP group in Boston and we went up there to protest the company’s refusal to release the drug. I had no idea the picture was taken. Bill sent it to me a few years later.

So when you joined ACT UP you were still working on Wall Street, right?

Yes, I was a bond trader by day and ACT UP activist by night.  I was working at JP Morgan and one day [in March 1987] I got handed a flyer about ACT UP’s first demonstration on Wall Street. I didn’t actually see the demonstration—it started after I got in—but everyone on the trading floor had gotten the flyer. And when I went home that night and saw it on the news I thought, wow, that’s power. I showed up at the very next meeting and I never missed a meeting after that. But I was still in the closet at work, so what I concentrated on at ACT UP was, I became the chair of its fundraising committee. This way, I could contribute without outing myself at work. I lived this double life for a while until I finally had had enough. My [T-cell count] was just a little over 100—I think it was 106. So I came out at work, and I went on disability the same day.

Some say that the grass roots activism practiced by ACT UP could be a good model for efforts like Occupy Wall Street. Do you think the groups are comparable?

I think you can find similarities, but I think there are more differences. I wasn’t one of the ones wagging fingers at [Occupy Wall Street protestors] saying, ‘Oh, you were doing everything wrong.’ They were doing something new that hadn’t been done before, and to their credit, for a month or two, they completely grabbed the country by its lapels and had everybody’s focus. This was a story larger than ACT UP has ever generated. They got more press than ACT UP had in five years. So I have to tip my hat to that. That conversation—the broad issues they raised—have remained on the table. But now they have to start adapting some of the longer-term techniques, and setting short-term and long-term goals.

The developments that we are seeing with pre-exposure prophylaxis, test and treat, and particularly HIV cure research seems to have energized the AIDS community of late.

I am very encouraged. It certainly got me back in. There is a lot going on right now on the research front and while the activism is never going to be what it was during ACT UP’s hey-day—none of us are under the allusion that we can recreate that because we don’t have the level of death and dying—we definitely know how to strategize. We are not at the bottom of the learning curve, we are at the top. Plus we have all these new HIV prevention tools.

Why hasn’t vaccine activism been as vibrant as treatment activism?

As far as loud activism, people getting angry, that tends to go where there is the most need. We have seen for well over a decade that vaccine researchers have not been terribly underfunded. The activism would be loud if it was underfunded. Everyone is on the same page that the [search for an effective vaccine] is a science problem. We keep having to continually go back to square one to figure this out and solve that problem, and I think there is an understanding, a patience among vaccine activists that [finding a vaccine] is really hard. And because the money is there, there is not a huge need for demonstrations.

They are stunned that they haven’t heard about it. They don’t know the story at all. This is not the fault of their generation. Most generations take a while to learn what happened just before them. They think the current world they are living in has always been this way, where meds keep you alive for a long time. Everyone under 35 thinks it has always been that way. They are just shocked by the story. Shocked by the indifference of the country to our death and dying in the 1980s. They are very moved and inspired by the film.